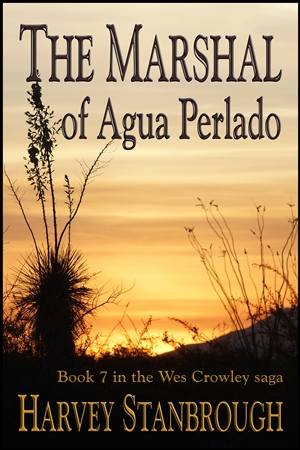 The Marshal of Agua Perlado is Book 7 in the Wes Crowley saga. The titles are now arranged chronologically as one long saga, but each also is a stand-alone novel.

Having left his old life as a Texas Ranger behind, Wes travels to Mexico to seek the family of his beloved Marisól Martinez de Silva. He finds them in Agua Perlado, a quaint, peaceful fishing village in the state of Guerrero.

He becomes friends almost immediately with the entire family, especially Miguel, and basically adopts them as his own. The feeling, for them, is reciprocal.

Except for one firebrand. The youngest remaining sister, Coralín, believes Wes is a showoff and a ruffian. Or at least that’s what she says.

Coralín blows into a room as if she’s a whirlwind and leaves the same way.

Although Wes is almost constantly confused by her words and actions, he is intrigued to the point that caution is not a viable option.

The one thing Wes knows for sure is he won’t go back to being a lawman. But when some banditos come along and murder a member of this peaceful fishing village, Wes realizes he must protect those who deserve it.

He agrees to do so in his new job as the marshal of Agua Perlado. The ride isn’t over quite yet.

There’s plenty of action in this book as Wes arrests those who would destroy his adopted town, repels attacks and swaps tales with the proprietor of the local cantina, who also is the keeper of the tales for Agua Perlado and the surrounding region.