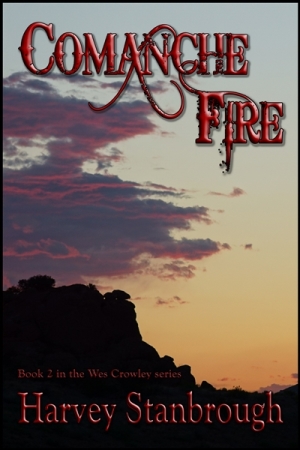 Comanche Fire is the second prequel and Book 2 in the Wes Crowley saga. Although the titles eventually will be arranged chronologically, each is a stand-alone novel.

In Comanche Fire, Wes Crowley and Otis “Mac” McFadden have joined the Texas Rangers in Amarillo in the heart of Comancheria, the traditional Comanche homeland. As they grow into their life as Texas Rangers, they endure hardships and battles, including one all-out attack on Amarillo. They pursue Comanches and banditos across the plains and through the arroyos of the north Texas panhandle.

With the number of Rangers dwindling, the captain arranges ingenious loop patrols, both to watch for Comanche and Comanchero activity and to make the Ranger presence known to civilians in north Texas.

In Comanche Fire we meet the venerable Talbot brothers — one preacher, one farmer, and one bandito — as well as a host of other characters. We learn that not all Rangers were always on the right side of the law, and not all banditos are evil to the core.

Of course, we also keep one eye peeled for Four Crows and his band, who seem always a thorn in the side of the Rangers. Finally, we witness the swearing-in of some new Rangers and can finally release the breath we’ve been holding as the Ranger Troop from Amarillo seems on the rebound.