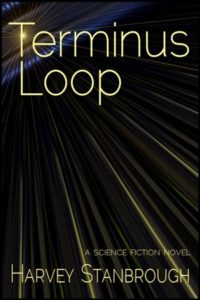 The basis of life as we know it is carbon.

Suppose the nucleus of every carbon atom is a sun. Suppose one electron “planet” swirling around that nucleus supports life.

And suppose a group of scientists theorize that, like space, time is a maleable factor in the universe. And that even the term “universe” depends strictly on the vantage point.

In the future on Earth, with Heisenberg’s Uncertainty Principle disproven and set aside, the way is clear to test the Theorum of Interspatial Travel Through Miniaturization and Recovery (ITTMAR).

Due to a simple mathematical error, the first trip ends in tragedy. But now, years later, Adam Stanton is ready to pick up where the first Traveler left off.

The console in the Travel Lab is set for a round trip of only 15 minutes. During that 15 minutes, Adam Stanton will spend 3 years on a sub-atomic planet. One second on Earth equals 1.2 days on Tremer. Five minutes equals a year. He will study the flora, the fauna, the geology and the people. And he will be retrieved.

The Guide’s calculations are precise, so the trip should be routine.

But it isn’t. It’s far from routine.

Now available for order as an ebook at all ebook retailers via this Universal Link.