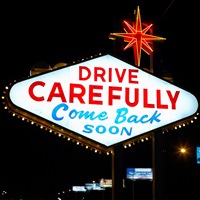 This post will be the last in my Microsoft Word for Writers series. I hope you’ve enjoyed it and gotten some benefit from it. Of course, I’ll be back in about 10 days with a new post on a topic of interest to writers, self-editors and self-publishers.

Some have mentioned that I haven’t explained Microsoft Word’s styles function. That’s because this blog series is intended as a general guide to using Microsoft Word as a writer or editor, not for laying out ebooks or periodicals or other publications. However, I’ll touch on the styles function here just to round out the series.

Per my friend, Chris O’Byrne, “A style is a way of defining how a paragraph (or character) will look.” Working with styles is simply a matter of defining the style, and then applying the style. Let’s work up an example.

To Define the Style

in your menu (or ribbon) you would click the Home tab and look for Styles or Quick Styles. This is how mine looks:

If you click the Quick Styles icon (in Figure 20 it’s on the right), you’ll get a pop-out menu that looks similar to this (please forgive the warped appearance of the final few pics in this post): 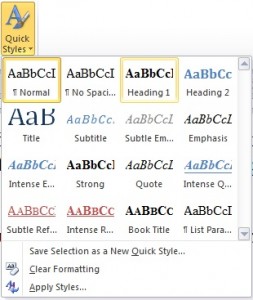 The third item in the top row is the Heading 1 style. If you right click that icon, in the ensuing dropdown menu you’ll see Modify. 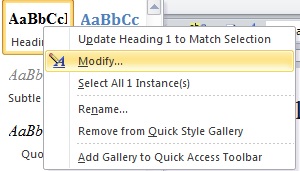 Finally, when you click Modify you’ll see this dialogue box: 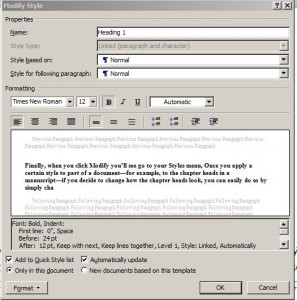 As you can see, you can change the font face, size and attributes about 1/3 of the way down the dialogue box, but if you click Format at the bottom left corner, you can set the Font and Paragraph aspects as well as several other settings. When you’re finished, simply click OK.

To Apply the Style

once you’ve defined the style, you’ll select (highlight) each chapter head, then go to your Quick Styles menu and click Heading 1. Word will apply all aspects of the style to the selected text. Of course, you can also modify the definition of any of the styles in the Quick Style menu following the steps above.

However, although such mechanical niceties certainly can come in handy when laying out a book or a periodical for publication, as a writer (or editor) that isn’t your job.

To prepare your manuscript for submission to agents, editors and publishers

The title of the overall work should be centered (no indentation) and in bold, but the prologue, epilogue (if any) and chapter titles and subtitles should be left justified (still no indent) and in bold.

The body text should be left justified in 12 point font, and the first line of each paragraph should be indented by 1/2″.

Use the paragraph formatting tool (see my post The Paragraph Formatting Tool) to set everything.

Here are some don’ts for you

That’s it for now. Until next time, keep writing!
Harvey

Note: If you find something of value in these posts or on this website, consider dropping a tip into Harvey’s Tip Jar on your way out. If you’ve already contributed, Thanks!