I went through a 4-month writing drought, but that’s all over now.

I’ve just released THE ARK, the first book in The Ark series.

Stephen Hawking once wrote that “[E]ither a nuclear confrontation or environmental catastrophe will cripple the Earth at some point in the next 1,000 years. However, by then our ingenious race will have found a way to slip the surly bonds of Earth and will therefore survive the disaster.”

The Ark is that way. The very future of humanity depends on it. 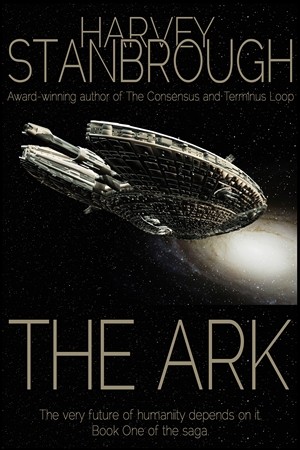 Unfortunately, and despite the intensive screening process for the crew of The Ark and the repopulation passengers she’s carrying, wherever humans go, they will bring along their flaws, foibles and shortcomings.

The Ark is a city of over 200,000 souls. It’s also a civilization in its own right, representing several civilizations from Earth. On it, there will be romance, fun, anger, and various minor and major conflicts—in other words, Life.

Come along and see where you fit into the mix.

If you use any other retailer, you can find it at this universal link: https://books2read.com/u/me7nZZ.

The first sequel, THE JOURNEY HOME: PART 1 will be released later this month.

The second sequel, THE JOURNEY HOME: PART 2 will be released in January.

Early reviews for THE ARK

“I just finished breezing through The Ark, and absolutely loved it! It may indeed be more of a romance than you initially intended it to be, but you’ve often and perhaps always incorporated a significant romantic element in your work. The romantic elements have always been part of what’s always made me fall in love with your characters and their stories. This one was no different. I started it because I couldn’t fall asleep last night, thinking that if I just read for a while I might be able to, but having begun it I couldn’t put it down. All in all, it was a great read.”

From K. C. Riggs, author of The Widow’s Circle and other works

I read it in one sitting! Didn’t wet my pants but didn’t stop until I was done either. I’m ready for the next one.

From Rober J. Sadler, author of Jamaica Moon and several other novels in the Black Book Investigations of Michael Grant and Associates

Deftly done. I very much enjoyed The Ark and discovering it page by page. I read it in three goes, other things interfering with a single reading time-frame. Overall well done. The sequels should be a lot of fun!