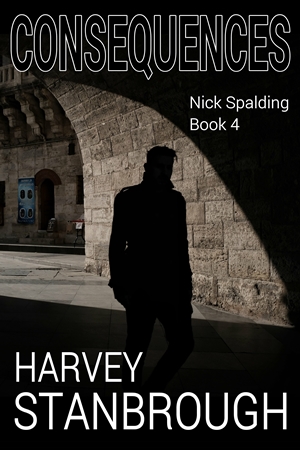 In this fourth installment of the Nick Spalding series, Nick and Marie are a solid team.

The Others have been defeated, or so they believe. But treachery and treason among their colleagues soon prove that isn’t true.

The leader of the Others, someone nobody had suspected, plans a final master stroke to bring the nation to its knees.

Nick and Marie, directed and supported by their colleagues, must help avert a tragedy with national and possible international implications.

In the end, Marie Delacroix is even more valuable asset than anyone could have known. Her aim is spot-on and deadly.

In Consequences, Marie again has a chance to prove herself as a warrior, and Nick again is torn between keeping her safe and trusting fully in her abilities.

But through a set of harrowing experiences, they both learn more about each other and about themselves. And they both prove that no team could be more natural or more suited for each other.

Such are the consequences of living an authentic life, and your significant other doing the same.

Available as an ebook at all ebook retailers via this Universal Link: https://www.books2read.com/u/3yDnyL.