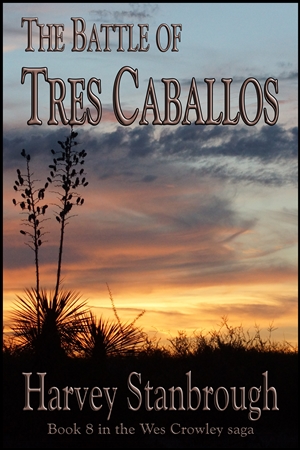 The Battle of Tres Caballos is Book 8 in the Wes Crowley novel series. The titles are now arranged chronologically as one long saga, but each also is a stand-alone novel.

Wes is well settled in his life as a married man and the marshal of Agua Perlado, but life and fate have a great deal more in store for him.

As he and his beautiful Coralín are returning from their honeymoon, they are set upon by banditos. Although protective of all people by nature, Wes has never experienced such a massive sense of urgency as he encounters when his beloved is in harm’s way. Nor has he experienced such an adrenaline calm as washes over him, enabling him to remedy the situation almost immediately.

Later, Wes is surprised to meet two people from his long-ago past. One is a powerful friend and a force for good in the region, and the other is an enemy he didn’t even know he had.

The action continues as Wes accepts a special appointment that he never expected, battles an enemy who is more cunning and vicious than any Comanche, and has a first-hand experience with the magic that is common at that place on the horizon where reality just folds into imagination.