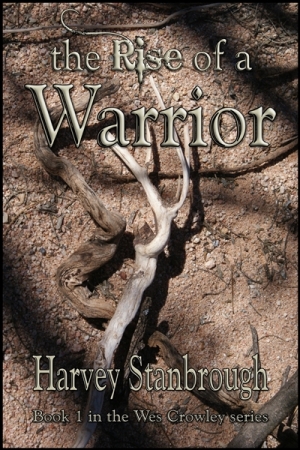 The Rise of a Warrior is the first prequel and Book 1 in the Wes Crowley novel series. It begins a sweeping saga, an action-adventure, historical-western romance that spans 50+ years. Although the titles are arranged chronologically, each is also a stand-alone novel.

In The Rise of a Warrior, Wes Crowley and Otis “Mac” McFadden are teenagers in Watson, Texas, a town some distance north of Amarillo in the Texas Panhandle and the heart of Comancheria, the traditional Comanche homeland.

An impressive group of Texas Rangers ride in to the local livery stable to swap horses. To convince the owner of the livery stable of the necessity of the trade, the ranking Ranger, Corporal Connolly, describes in detail what the Comanches are capable of when they raid. A few minutes later the Rangers ride out on fresh mounts.

The corporal nods at Mac on their way out of town, and Mac decides on the spot that’s a sign that he has to join the Rangers. As he has always done, Wes goes along for the ride. What else should a partner do?

At what is eventually dubbed The Battle of Boquillas Draw, the Rangers take down one of the more dangerous renegade Comanche war chiefs and all but one of his raiding party.

But that one survivor is unique among the Comanches. He bears the sacred number in his name and is destined to become one of the greatest Comanche war chiefs ever known — at the ripe old age of fourteen.

Come along to witness the advent of Wes and Mac as Texas Rangers and the rise of a Comanche warrior, Four Crows.