Still under the weather a bit today but definitely on the mend. It feels good knowing by this time tomorrow I ought’a be back to my normal level of unhealthinessicity. (grin)

Rolled out a little before 3 this morning. Sometime overnight my subconscious set up an alarm reminding me to get the “boxed set” of the Wes Crowley novels out for that one guy who might want it for Christmas. (grin)

So in the midst of my first mugga coffee, I started copying/pasting and formatting. Then spell checking, reparagraphing here and there, revising my use of ellipses and em dashes, etc. Basically I brought the entire series up to my current skill level as a writer. Amazing how much stuff I’ve learned since I wrote the first word of that series back on October 19, 2014.

And no, I don’t usually go back over old stuff. I did so this time only because I was putting the whole thing in one book. And I didn’t change words (except a few errors I found). Only paragraphing really, for readability and pacing. Over 800 pages, just under 415,000 words. Cool. 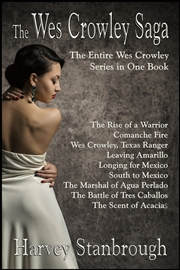 Created a promo document and a new cover for the overall series (that’s it over there on the left) and then resized all nine novel covers and inserted them in the book as well, one at the beginning of each novel. Isn’t Coralín pretty?

So that’s all I did from about 3:30 right up through 10:30. That was almost an hour ago. Then I published the thing to D2D, Smashwords and Amazon. Then I came here to write this, and now I’m gonna break for a bit, maybe visit Dean’s site (new Heinlein’s Rules stuff over there) before getting to the writing computer.

Sometime in the next few days I’ll do some research to see whether I can find a place that produces the boxed-set boxes. If so, and if they aren’t terribly expensive, and if I don’t have to order a b’jillion of them at one time, I hope to sell this creature through StoneThread Publishing in paper as a boxed set too. Failing that, I might have it put in one Lahahaha HONG volume.

Oops. On break since I wrote the above, and forgot to put the new cover on the publisher’s site and create a new page for that one. So off to do that now, THEN to the writing ‘puter. Here’s the book page if you wanna look at it.

Okay, got the updates done, then had to go find my little girl cat. Now that everything and everyone is where it/they’re supposed to be, maybe I can play for awhile.

I just want you guys to know, turning out a lot of words doesn’t mean I sit here and write all day. What it takes is getting to the writing computer, and then writing.

Case in point, at 10:30 this morning I made my first attempt to get to the writing computer. I finally got there shortly before 2 p.m. Hey, stuff happens. And when it happens around here, it seems to always come off the blades of a fan. (grin)

Had three frantic sessions crammed in between other stuff. That’s all right. Had a blast while I was writing. And it’s a funny story, depending on which way your sense of humor is warped.

Now I’m gonna post this (almost 5 p.m.) and put down some numbers.