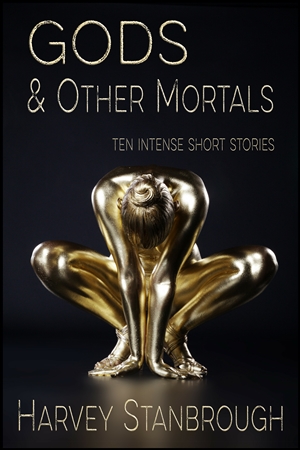 This is a collection of ten intense short stories. These stories are also included in two five-story collection: The Benefit of Breathing and Sanctified.

In “Pete & Repeat,” c’mon, everyone knows the old non-joke about Pete and his buddy, right? Still, seems like there’s always one more young’un wantin’ to put an old timer to shame. Only it doesn’t always happen just that way.

“The Breath Formed” is a far more sober story from the point of view of the hunted. There is a “big sound,” the explosion that accompanies a gunshot from a high-powered rifle, from the POV of the creature whom it most directly affects. How strange that the gentle creature has more respect for humans than they will ever have for anything but themselves.

In “Harold Nickel’s Last Dime,” for a boy born and bred in Florida, hanging out in the drizzly, frozen northwest is far from ideal, or even possible. Even if he is in witness protection. What will Harold Nickel risk to feel the sun on his face again, smell the salt air. And how far will he go? And go? And go?

“The Brief, Happy Career of Judas Talbot, Circuit Riding Preacher” is a humorous and sobering look at a 22 year old in the 1860s Texas Panhandle who mistakes the primal urges in his gut for a calling to preach the gospel. He hits the circuit where he finds the women amenable and the men bad shots. Thankfully. If you enjoy laugh-out-loud humor, come along.

In “Death of a Persona” we get a tongue-in-cheek glimpse into the private, personal affairs that go on between a writer and his personas and among the personas themselves. What does a writer do when he realizes his intellectual property is starting to come up missing? And what if he finds out one of his own personas is stealing his ideas? Or even whole stories?

In “Desecration,” only a god could walk forever without leaving anything behind or approaching anything else. But how? And why?

In “Barbecue,” two buddies on a camping trip in a remote desert location. A town full of women nearby. Fantasies abound. But is it all fantasy? Or is some of it sheer terror? Come along for a surprise.

On “The Day They Came,” there had been an alien invasion. Freedom fighters were caught and held in a rainy, drizzly prison. To wait. But for what?

In “Exotic,” a meek, mild accountant from Cleveland finally, finally gets a break when he lands a big client for his firm. But he gets an even bigger one when he gets to Louisiana.

And in “Sanctioned” the reader is drawn into a seventh-floor walkup. About fifteen minutes before midnight, the telephone rings. The gentleman in the apartment is annoyed, waiting for his favorite state-sanctioned program to come on television at midnight. But this is a phone call that will change his life. Or maybe give it back.

This title is not currently available in print. However, we will consider requests.