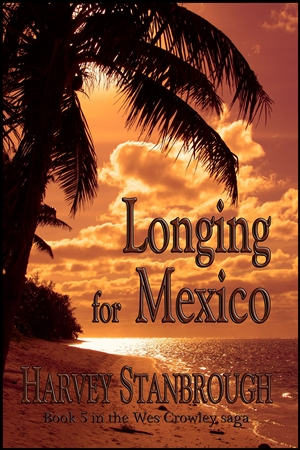 Originally the second Wes Crowley novel, with the advent of three prequels, Longing for Mexico actually is Book 5 in the Wes Crowley saga. Although the titles eventually are arranged chronologically, each also is a stand-alone novel.

Longing for Mexico opens with what happens the night ex-Texas Ranger Otis “Mac” McFadden betrays his oath and his friendship with Wes. He creeps out of Amarillo rather than facing up to his friends and his responsibilities.

When the captain won’t allow Wes to go after Mac immediately, Wes continues to battle Comanches, and he falls deeply in love. For the first time in his life, he begins to plan around someone else.

But there’s a massive Comanche raid on Amarillo, and everything goes wrong.

Well over a year after Mac abandoned his oath and his friendship, Wes finally decides to leave the Rangers to track down his lifelong friend turned traitor. He must get the answers he deserves.

During his search for Mac, Wes visits Mexico where he finds new friends but also a few new enemies. He is joined there by a close new friend from El Paso, Ben Iverson. Ben brings news of Mac’s whereabouts and a job proposition for Wes.

Come along to see what happens when Wes finally tracks down Mac in the midst of the Arizona Territory.