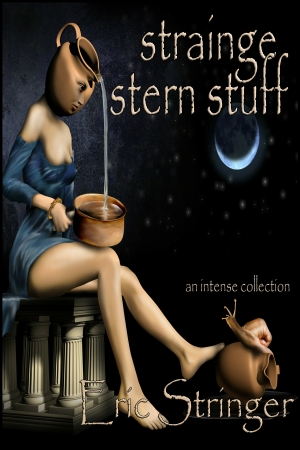 These stories run the gamut of Eric Stringer, from SF to horror, the mafia to humor, a retrieval in outer space to dementia in inner space. There is murder, mystery, terror and psychopathy. Even a twisted psychiatrist and a helpful mob guy.

Three of the first five stories feature Charlie Task, the title character from the novel, Confessions of a Professional Psychopath.

Ever wonder what goes into making a psychopath? Find out in “The Odd Task.”In this one Charlie is an as-yet unnamed protagonist, doing what he can, using his special skills to remove blights from the world.

Charlie again. Ever wonder what it might be like to sit down in a psychopath’s home and interview him? You’ll find out in “A View to the Curious.”

In “A False Sense of Finality,” we take a breather from Charlie, but maybe it’s out of the frying pan, into the fire. In this one a bereaved mother lives through her memories and through her child. Or possibly through memories of her child. And she comes to a realization. Again.

In “The Ethics of Murder,” Charlie’s back. He returns to his hometown to visit with an old friend at a high school reunion, at the friend’s request because the friend needs a favor. Or at least that’s how it started. It’s always a good idea to be careful what you wish for.

In “Heart to Heart,” noted psychiatrist Robert “Bobby” Singleton is defended in action and deed by his lifelong friends, connected guy Joey Di Salvo and NYPD Officer Salvatore Acolese. After all, Bobby just wants to turn the tables on his filthy rich socialist hypocrite father and REALLY do things to help the poor and downtrodden. Of course, help can take many forms.

In the first of the last five stories, “Needful Things,” a woman is drawn to a shop that looks like an antique store. She’s looking for furnishings for her home in the French Quarter, where, it turns out, she also lived a very, very long time ago.

In “Saving the Grenlow,” Jim Cable has been sent to stabilize the Grenlow, a Morgan-class interplanetary transport, and bring it home. Unfortunately, the engine room holds a mystery he didn’t bargain for.

In “Rabbits & Wild Dogs,” Marco and the author chase down Joey Bones to teach him a lesson. Joey’s been trash talking Marco and threatening to shoot him. The threat doesn’t bother Marco, but being called a rat? Now that bothers him.

In “The Compartmentalized Mantis,” the question is, can a man have a relationship with an EnviroSuit? For that matter, can an EnviroSuit, especially one with a female personality, long abide the imperfections of a human male? Especially when she compares him with a massive, god-like creature machine?