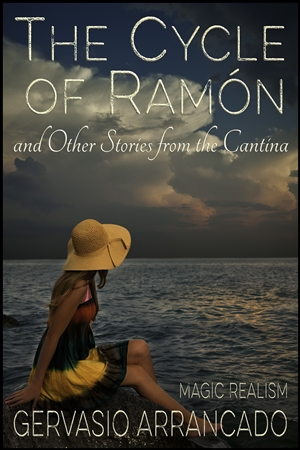 This is a collection of magic realism short stories.

In the title story, sometimes letting go just isn’t possible. You’ve loved the same soul down through the ages, but just before you can be together forever, he is ripped away yet again. The eerily weeping heavens combine with the sea and a departed love to ease the burden of the one who has been left behind.

In “Carmen, Whose Face Was Cracked,” the kindest and most beautiful woman in all of Mexico suffers a cracked face, and it has nothing to do with vanity. In “The Rabbit & the Priest,” drought has ravaged crops, killed stock and left the villagers hungry. What can one rabbit do to help?

In “The Dawn of Rigoberto,” an orphan grows to be the tallest, strongest, wisest and kindest man in the fishing village of Agua Rocosa. His mother wandered off within weeks of his birth and is rumored to be a witch, but has gained goddess status with many of the villagers.Nearing her death & as he obtains his thirty-third year, she gives him the gift of his father and much about his life becomes clear.

And in the oldest of these stories, “The Storyteller,” Juan-Carlos Salazár, to keep his customers entertained, relates stories of the magic that permeates that area where reality folds into imagination. There is a wind that lost its way among the rocks on the hillside, clouds so overcome with grief and sorrow that they overpower the sun and take vengeance on the village, raindrops so large they force birds to take cover or walk, and heat so severe that the only boarding house in the village spontaneously combusts and burns to the ground, leaving no sign that it ever existed.

Magic is in the air! If you’ve enjoyed the works of Gabriel García Márquez and Isabel Allende, you’ll enjoy these Stories from the Cantina.