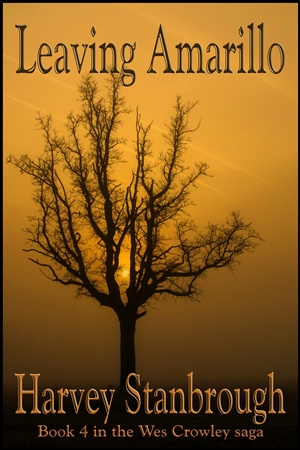 This time I thought I’d showcase my very first novel.

Although it was the first novel written in the series, with the advent of three prequels, Leaving Amarillo actually is Book 4 in the Wes Crowley saga. The saga spans 60 years in the life of Texas Ranger Wes Crowley. The titles are arranged chronologically, but each also is a stand-alone novel.

In Leaving Amarillo, Wes Crowley and Otis “Mac” McFadden are lifelong friends. Wes is a year younger and has always looked up to Mac, so when Mac joined the Texas Rangers in the 1870s in the Texas Panhandle, Wes goes along as usual.

But placing unequivocal trust in anyone is seldom a good idea.

Honor and cowardice, greed and hatred, anger and love intertwine in this fast-paced tale of one man discovering what’s true in life.

Come along as Wes battles Comanches, tracks enemies and friends, waxes philosophical, falls in love and ultimately finds himself in a place where one era hasn’t quite ended and the next hasn’t quite begun.

Wes Crowley leaned forward and poked at an ember that had popped out of the campfire a moment earlier. “Been a long trail this time, boys.”

His attention fixed on the ember, he worked the tip of the stick under the edge nearest him, then flipped it backward into the fire. A few sparks released. “Sure lookin’ forward to gettin’ back.” He looked up, a tired, easy grin on his face. “What about you, Mac?”

The man across the fire was his closest friend. He and Mac had come on the Texas Rangers together several years earlier when they fancied themselves adventurers and were young enough to feel bullet proof. Mac sipped his coffee. “Sounds right to me.” He took another sip. “This stuff’s nasty… dissolve the stiff hairs off a porcupine.”

Wes looked at him. “First cup was good enough that you wanted another.”

Mac swirled the remaining grounds-rich coffee in the cup. “Let’s just say it got worse with age.” He paused. “Been thinkin’ about it, Wes… I’m thinkin’ this might be the last one.”

To get a FREE review copy, go to https://www.smashwords.com/books/view/492123. During checkout, enter coupon code MZ75S (not case sensitive).