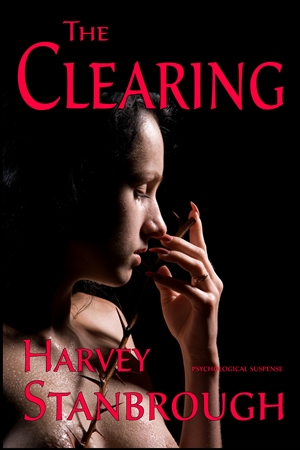 Back to books written under my own name. Something for crime/mystery/detective fans out there.

The clearing. It’s beautiful. It’s remote. It’s a perfect setting for magic and romance and the plucking of young, ripe, forbidden fruit. And it’s a graveyard.

This is a strongly emotional, fast-paced crime thriller / psychological suspense novel. On one side, Randall B Cregg’s father has always hoped his son would feel a calling to take over the church someday.

After a particularly troubling traumatic experience, the boy does feel a calling, but it is not the one his father hoped for. And Randall’s mother is a veritable fount of Christian charity, even in her traditionally submissive role in the family.

On the other side is Detective Sean McManus. He’s a matter-of-fact gumshoe who just wants to work his cases and make ends meet. But moonlighting isn’t always what it’s cracked up to be. Especially when you cross wires with a man like Big Frankie Giuliatti.

The night was dark, the air heavy. A foghorn sounded in the bay down below the coastal hills and was driven flat in the pattering rain.

Still sitting in his car, Detective Sean McManus turned on the windshield wiper for one swipe. He leaned forward and peered at the warehouse before the rain could accumulate again.

Some distance above the bay door, a weak bulb under a thin, dented metal shade cast a dim light. The light was further refracted and diminished behind the veil of drizzling rain. Still, he could just make out the seam where the broad door met the wall.

No small entrance door, at least that he could see. That was odd. To the right, near the end of the building, a smaller window. Probably the office.

The caller had said to check the office nearest Front Street. Good. McManus had parked just off Front Street. So probably that was the right place. But the caller wouldn’t leave his name or any other information.

Like what McManus was supposed to find. Or how the guy knew to tell him where to look.

An intentional lack of information was always indicative of bad things to come.

To get a FREE review copy, go to https://www.smashwords.com/books/view/609701. During checkout, enter coupon code UV25P (not case sensitive).

Next week, “If You’re a Writer and I’m a Reader, You Owe Me Something.”